The environmental case for remote working

During the pandemic, the environmental and societal benefits of working at home quickly became apparent. How can businesses protect these benefits in the future?

Anyone searching for a silver lining to the pandemic should look to the clear, blue skies above them. A reduction in pollution worldwide has been an unintended benefit of the lockdowns and stay-in-place orders imposed to control the spread of COVID-19.

There have been related societal benefits, too – the result of people cutting the commute and working at home. And while nobody denies that these are good things, the question is whether businesses will choose to protect them once the crisis has passed.

When the world went into lockdown in March 2020, the impact on the environment was seen almost immediately. On 19 March, researchers from Colombia University told the BBC that carbon monoxide, mainly from cars, in New York had been reduced by nearly 50% compared with the previous year. They also found that there was a 5-10% drop in CO2 over New York and a solid drop in methane as well.

In China, from 3 February to 1 March, CO2 emissions were down by at least 25% because of the measures to contain the coronavirus, according to the Centre for Research on Energy and Clean Air (CREA), reported CNN. “As the world’s biggest polluter, China contributes 30% of the world’s CO2 emissions annually, so the impact of this kind of drop is huge, even over a short period,” said Lauri Myllyvirta, lead analyst at CREA. The organisation estimates it is equivalent to 200 million tons of carbon dioxide — more than half the entire annual emissions output of the UK.

The fall in pollution during China country’s lockdown in January and February “likely saved 20 times more lives in China than have currently been lost due to infection with the virus in that country”, calculates Marshall Burke of Stanford University’s Department of Earth System Science, as reported in Forbes in March. He adds: “The fact that disruption of this magnitude could actually lead to some large (partial) benefits suggests that our normal way of doing things might need disrupting.”

For businesses looking to support a greener future, there’s one clear answer: continuing to offer remote working to employees, post-pandemic. In December 2019, Harvard Business Review suggested that commuting alone by car was a significant contributor to emissions (24% of global energy-related CO2 emissions come from transportation).

Research suggests employees would be more than happy to work closer to home in the future – shaped in part by an increased consideration of the environment and an awareness of the health risks around pollution. Research in 2018 revealed that commuters experience up to 30 per cent more pollution than those who work from home. And more than half (57 percent) of Americans surveyed by Randstad said it was important to them to live in close proximity to their work, specifically to lessen their environmental impact or carbon footprint.

In addition, people are more motivated than ever by the desire to stay closer to their families, and to establish a better work/life balance. For parents in particular, the opportunity to work closer to home is appealing – with a more flexible work culture creating more equity at home as both men and women are able to spend quality time with their families, reports CNBC.

In the future, not even the lure of the city will be enough to tempt some workers back to the office. Millennials specifically are reported to be rethinking the cost of travel, the lack of good schools and the limited quality of life that comes with city-living – and are moving instead to the suburbs. According to a 2019 article in The Wall Street Journal, US census data showed that the trend for young people leaving big cities continued for the fourth year in a row – with almost 38,000 people aged 25 to 39 left New York. In London, an article in The Guardian based on the latest data available states that “340,500 people moved out in the 12 months before June 2018”.

The role of flexspace

“Lasting changes to working and commuting patterns will be just some of the micro-economic changes that will endure long after the virus,” says Kazuo Momma, the man formerly in charge of monetary policy at the Bank of Japan. For companies wanting to get ahead of these micro-economic changes, flexible office space may be able to help – specifically by enabling people to work closer to where they live.

It seems that people do appreciate some separation between work and home – using the travel time as a psychological tool to decompress from the day. And it’s backed up by science. An increasing amount of research shows that ‘active commutes’, which involve walking or cycling, can make life better – even being as important to wellbeing as a marriage or a pay rise.

By providing office space proximate to where employees live, businesses can reap the rewards of happier employees, a diverse workforce – and a greener future for everyone

The world had to work remotely – and it worked. Now it’s time to do it on your terms, with a network of professional workspaces that enable people to work closer to home. Discover Regus’ portfolio of options

How will recruitment change following COVID‑19?

Choose the right style of remote work for you

Is remote leadership part of the new normal?

Keep up to date

Get news articles straight to your inbox 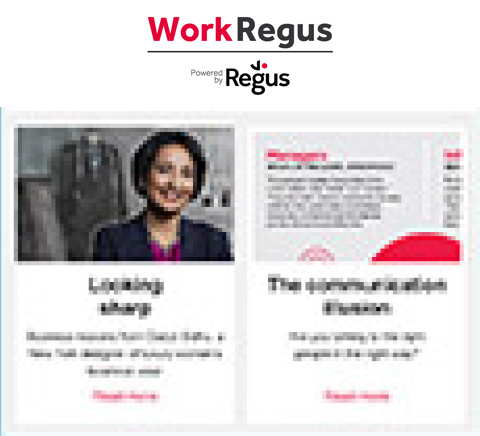 Executive assistants can work from anywhere too

The Workplace Revolution – a picture of flexible working

How is flygskam affecting the way we do business?

You are now signed up to our newsletter

You can unsubscribe at any time